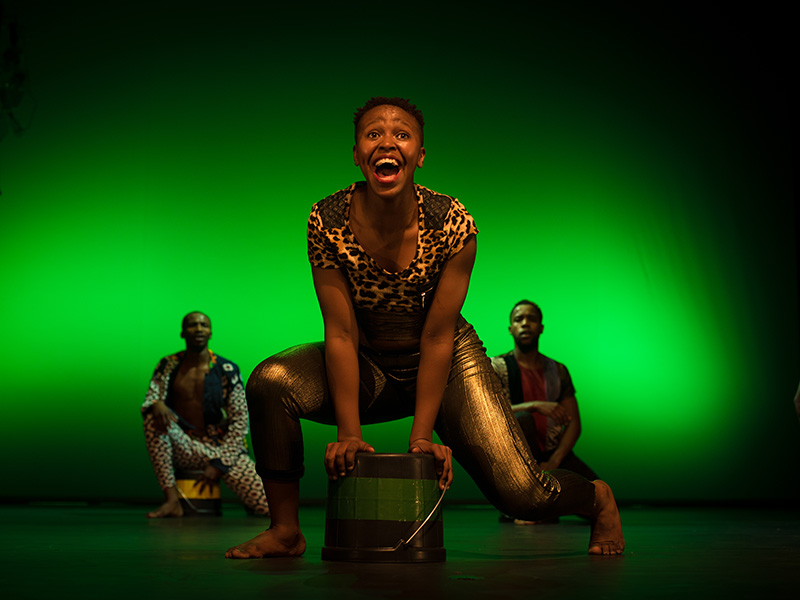 Rebellion & Johannesburg fuses traditional culture and contemporary culture to depict the landscape of the young individual wrestling with the convoluted South Africa as well as that of star-crossed lovers; Romeo & Juliet. Throughout the work we begin to discover that it is made up of various scenes which all seem to aid the entire theme of young individuals living in a chaotic land. It is when Shakespeare’s age old tale is introduced that we may get startled. The performers introduce Romeo & Juliet in a traditional South African context where a wild “Sangoma” replaces the concerned “Friar” and pink paint (Police used to spray protesters with pink water during demonstrations in Cape Town) the deadly poison.
FRANCESCA MATTHYS, February 2016

Jessica Nupen Grew up in Johannesburg where, as a young girl, she was exposed to the harsh brutalities of racism and the oppressiveness inflicted by a minority in power. These memories and experiences have had a profound impact on the way that she sees and interprets the world around her. Jessica completed her professional training in London at the Rambert School of Ballet and Contemporary Dance and has danced in Covent Garden, the National Theater of Mannheim and the State Theaters of Giessen, Lübeck and Berlin, and currently produces her work in Germany and South Africa. Her works have been performed in Germany as part of an African Female Arts collective and alongside dance greats such as Emio Greco and Ohad Naharin in Italy. She recently opened the South African Dance Umbrella Festival with her internationally acclaimed REBELLION & JOHANNESBURG dance-theatre production.
jessicanupen.com

Anmari Honiball Anmari grew up in the historical diamond town of Kimberley, Northern Cape, South Africa. She was awarded winner of the Lufthansa First Best Collections. Currently she is working under her fashion label ANMARI HONIBALL that produces locally made women’s wear.

Ed Blignaut Professional freelance photographer and videographer who focusses on capturing the essence of a subject, be it in nature or people. He has worked with Ross Garrett, Warren Van Rensburg, Steve Tanchel, and Sacha Waldman.