So Solo, the festival of one-person plays at WITS, is back with an inspiring third season of thought-provoking theatre. Book your tickets today!

So Solo, the festival of one-person plays at WITS has a line-up of note this year and will provide thought-provoking theatre between the 23 November and 4 December at Wits Theatre in Braamfontein.

The hugely anticipated So Solo kicks off with an inspiring 3rd season promising the same excellent standard of theatre performances, which audiences have been witness to since the festival debuted in 2014

This year 11 talented performers will take to the stage creating a programme characterised by a great diversity of form and expression. “The programme this year encapsulates the varied artistic impulses that characterise South African theatre and performance. So Solo magnifies the significance of storytelling and while different forms and techniques are used, the result is a festival that celebrates our shared and very unique reality.”

Johannesburg audiences can look forward to watching everything from comedy to drama at the festival, which will begin with So Solo’s officially commissioned play for 2016, Gqisha! The Chant that Calls. This socio-political play by Khayelihle “Dom” Gumede and Raezeen Wentworth reflects on the war dance of so many of South Africans striving for a better future. The piece is performed by Nhlanhla Mahlangu and will have 10 performances during So Solo. . Gita Pather, Director of Wits Theatre and So Solo said:  “Dom Gumede and Raezeen Wentworth are Wits graduates with very different strengths and talents. Both have proven their worth in the professional arena and. I was intrigued by the possibilities they would present as a commissioned duo. Commissioning a new play is all about the creative team and they have chosen to work with Nhlanhla who is a formidable talent on his own.

The So Solo plays will be performed in the WITS theatre venues.

Book online at www.webtickets.co.za or purchase your tickets from box office. 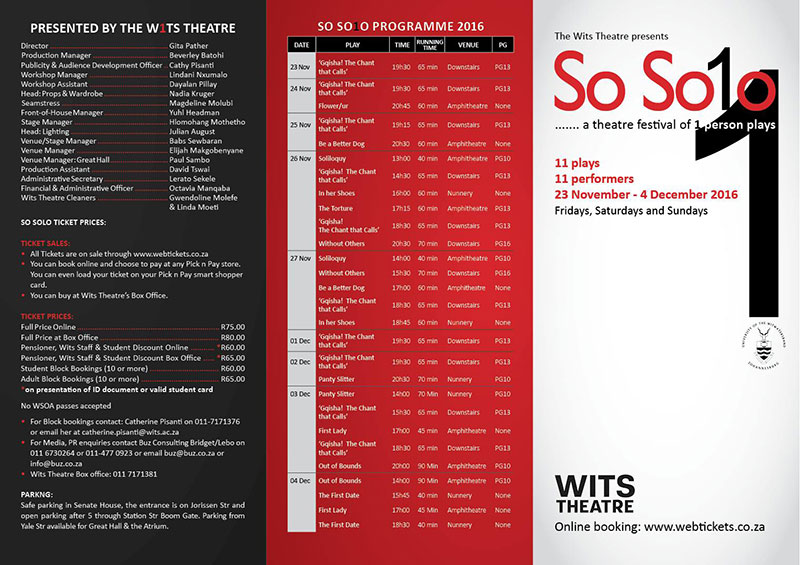